A reception to honor the winners of a high school middle school STEM video contest was held at sponsor State Farm’s CityLine on Feb. 13.

The goal of the contest is to inspire both students who create the videos and other, often younger students, who will view the videos. At the same time, the videos provide professionals and educators compelling content to share with students about the benefits of choosing a science, technology, engineering or math (STEM) track as they are educating themselves for a future career.

Videos describe engineering careers and medical technologies, create excitement about a future in technology and how students can play a part.

Volunteers, including technical experts, educators and video production teams, judged the entries. Three winners received $1000 for their entries, with an additional two runner-up winners receiving $500. This video contest is the fourth annual event from Tech Titans, and this year had more than 175 students participating. Student submissions were received from 6 different school districts and 11 different schools.

Middle School co-winners from this year's contest about Be An Engineer! are:

2019 Tech Titans Video Champion educator award winners are:
The student videos may be viewed on the Tech Titans YouTube channel. 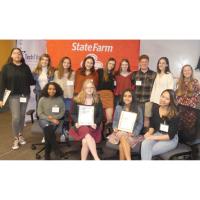